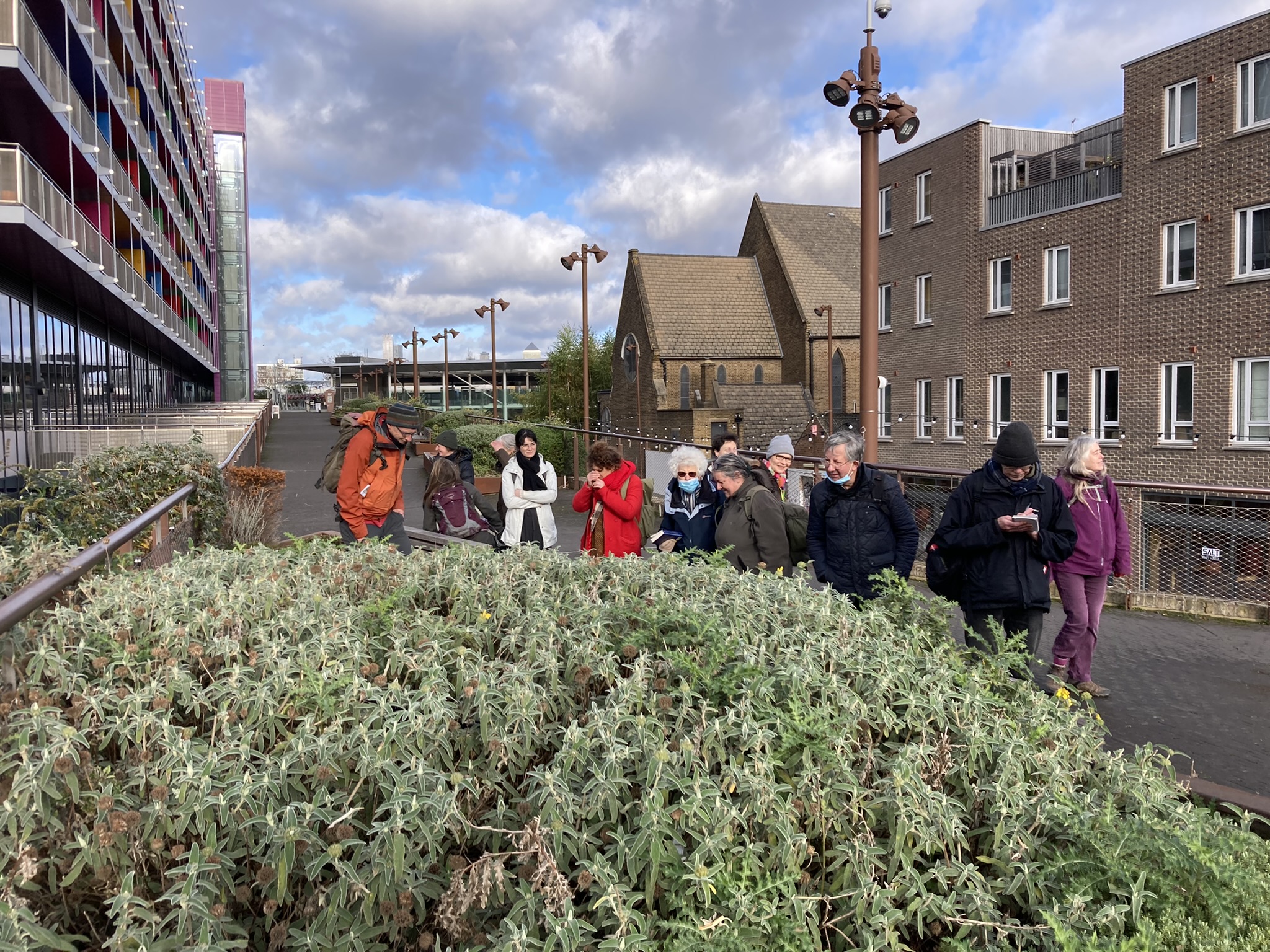 We met at Deptford Train Station at 11.00 on a dry but cold and windy day. This was our 13th annual hunt for wildflowers in flower on the first day of winter since 2009, guided by Nick Bertrand.  The hunt focuses on wild plants growing amongst the hustle and bustle of vibrant Deptford.  Seventeen people joined us for the hunt a mixture of people brought together by the Creekside Education Trust and members of the London Natural History Society.

Once gathered we headed up to Platform 1 of the oldest surviving railway station in London to a small patch of vegetation. We quickly found flowers of White Dead-nettle Lamium album, Perennial Wall Rocket Diplotaxis tenuifolia and Guernsey Fleabane Conyza sumatrensis. We also encountered Thale Cress Arabidopsis thaliana, much used in plant experimentation and research, Small-flowered Cranesbill Geranium pusillum and a rather magnificent White Campion Silene latifolia, which gave us a good start to the day. 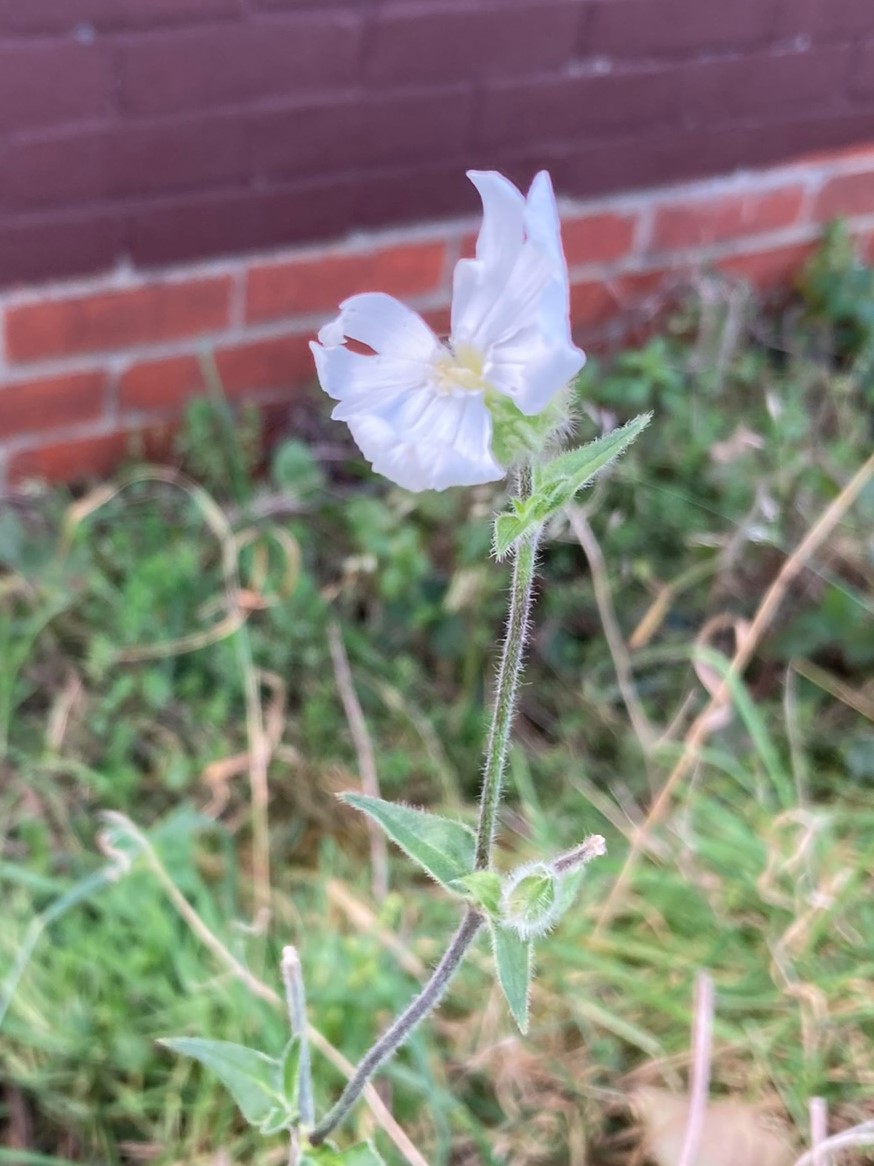 From there we walked down the dog leg ramp engineered by Colonel Landmann in 1836, it is a grade II listed structure.  Designed to facilitate rolling stock being transported between the platform and street level at Deptford High Street.  This is the last remaining of three such platforms that were built, the others being at London Bridge and Greenwich (https://historicengland.org.uk/ 09/12/2021)

Back to matters floral we found two ragworts. Oxford Ragwort Senecio squalidus, so called as it escaped from the Oxford Botanic Gardens having been brought there from the slopes of Mount Etna, Sicily in the latter part of the seventeenth century. It spread through London in the early 20th century. Narrow-leaved Ragwort Senecio inaequidens, a more recent arrival has been spreading around the area since first being seen in Deptford by Nick at nearby Convoys Wharf in 2002. It has rapidly spread through London this century.

From here we walked through Deptford Market and down the ginnel by the Good Friends Chinese takeaway. We found a Garden Pansy Viola x wittrockiana that had jumped from a window box. A little further was Four-leaved Allseed Polycarpon tetraphylum, an elusive little plant, it has small non-descript flowers but is spreading around the local area and doing well here in Comet Street. In the nearby network of streets we saw Ivy-leaved Toadflax Cymballaria muralis and Annual Wall Rocket Diplotaxis muralis. 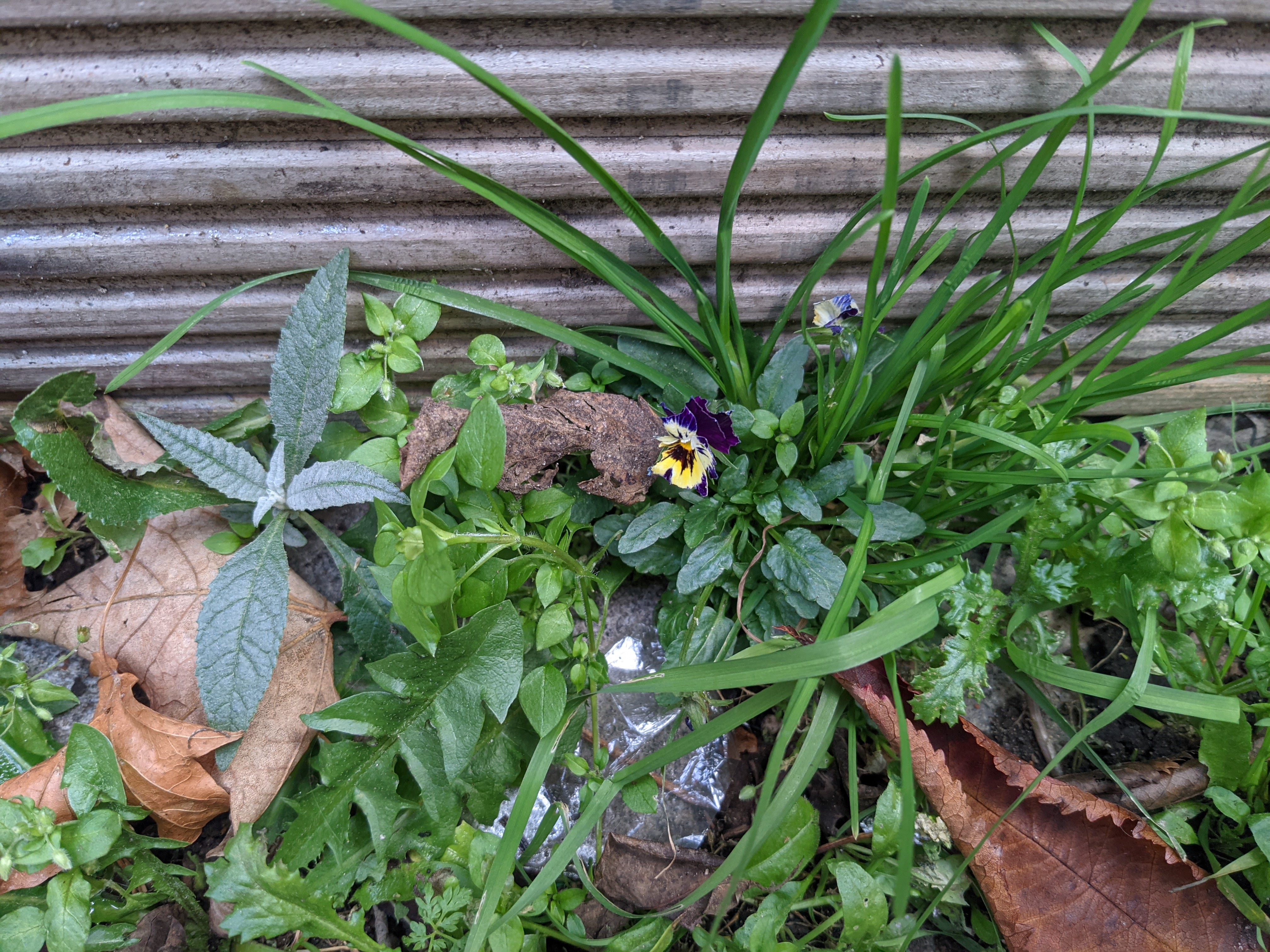 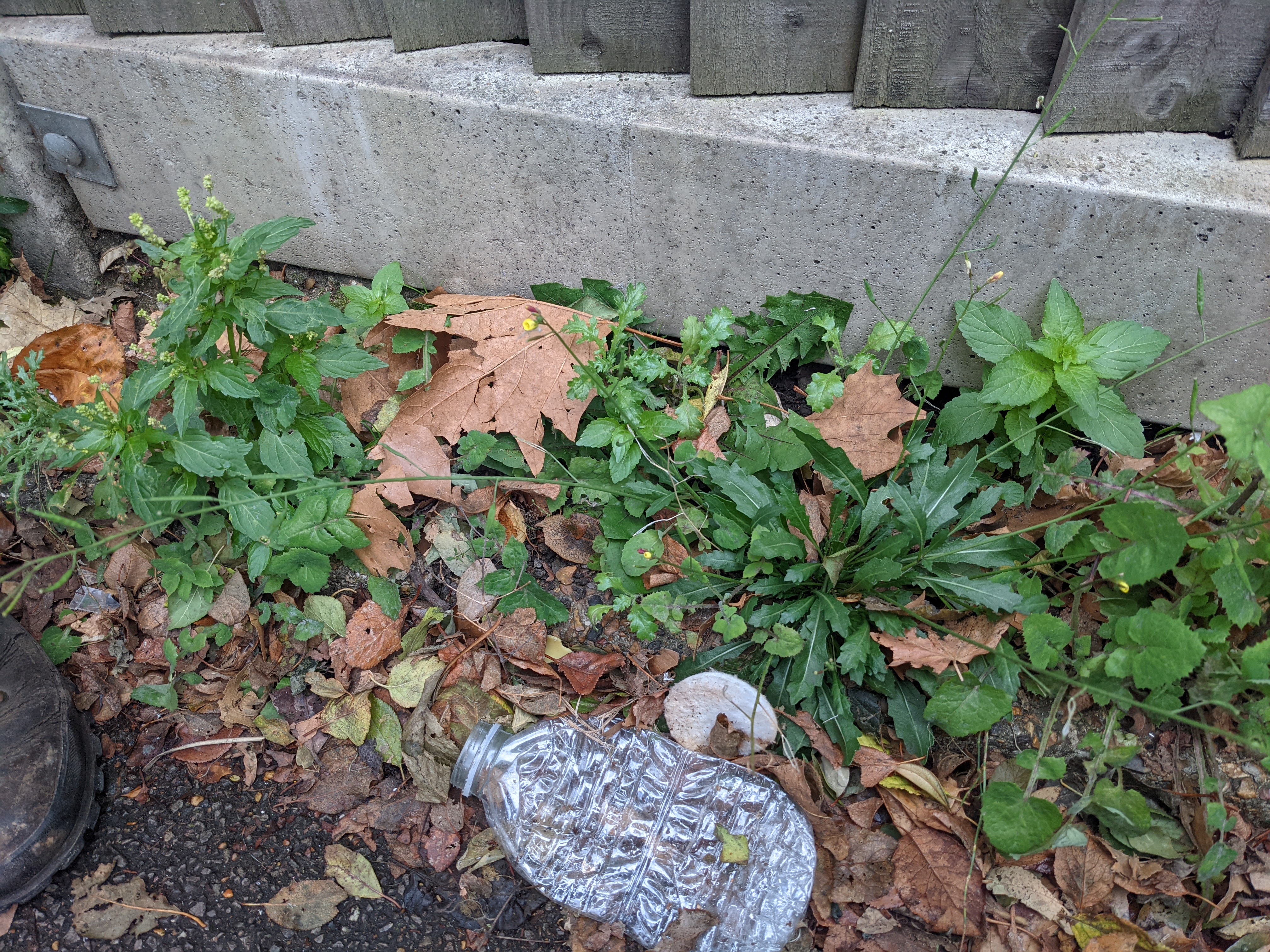 We continued through Margaret McMillan Park and found Green Alkanet Pentaglottis sempervirens, and then we stopped for a welcome lunch at Café Bianca. Refreshed we headed north up Deptford High Street and dived into the Evelyn Estate via Ffinch Street to see what we could find in the municipal lawns there.  Lewisham Council have begun relaxing the mowing regime so that the lawns are not mown all at once in. The aim, we think, is to increase floral diversity and we will see over the next few years if it works.  Cat’s-ear Hypochaeris radicata jumped up and purred its way on to the list.

We exited the Evelyn Estate and headed under the railway arch into Idonia Street to view Yellow Corydalis Pseudofumaria lutea which grows on a low wall. Further along the road were Harts Tongue Asplenium scolopendrium and Black Spleenwort Asplenium adiantum-nigrum and a population of London Rocket Sisymbrium irio, so called as it grew in abundance on fire sites after the Great Fire of London.

It started to rain in the sunshine which produced a beautiful rainbow as we crossed Deptford High Street.  Hoping the rains would soon pass, we entered St Paul’s Churchyard, but the heavens opened and there was little to see here. We pressed on to Sue Godfrey Nature Park. Tansy Tanacetum vulgare, Common Toadflax Linaria vulgaris and Round-leaved Cranesbill Geranium rotundifolium were added to the list. 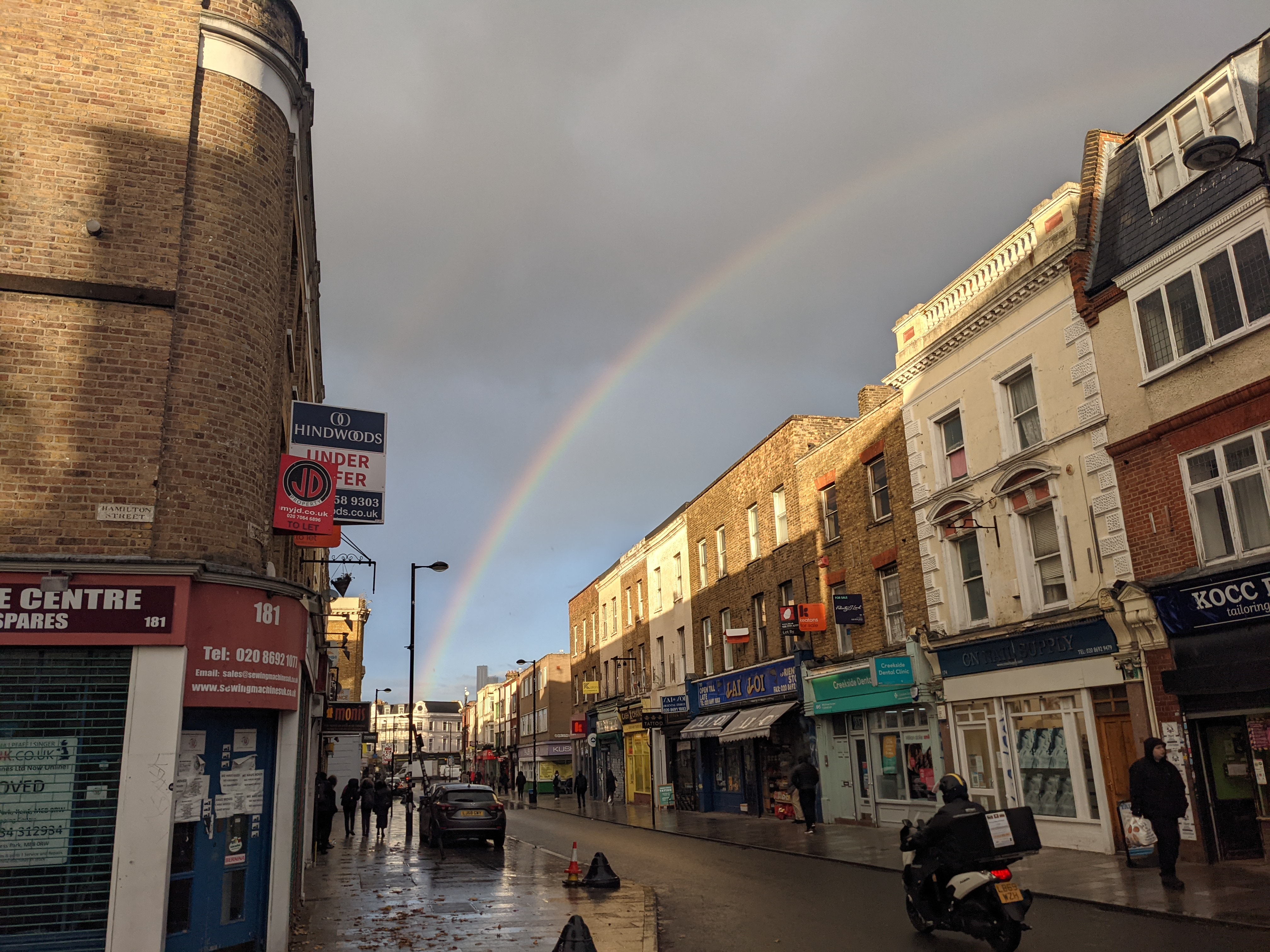 Now quite wet we headed to Creekside for a cup of tea.  Warmed up, we continued our count on Creekside Grounds, a wasteland site for over 70 years.  Viper’s bugloss Echium vulgare and Red Valerian Centranthus ruber were added amongst others. Tall Nightshade Solanum chenopodiodes was also seen.  The differences between Tall and Black Nightshade were discussed, the key one of these being the relative hairiness of Tall Nightshade. 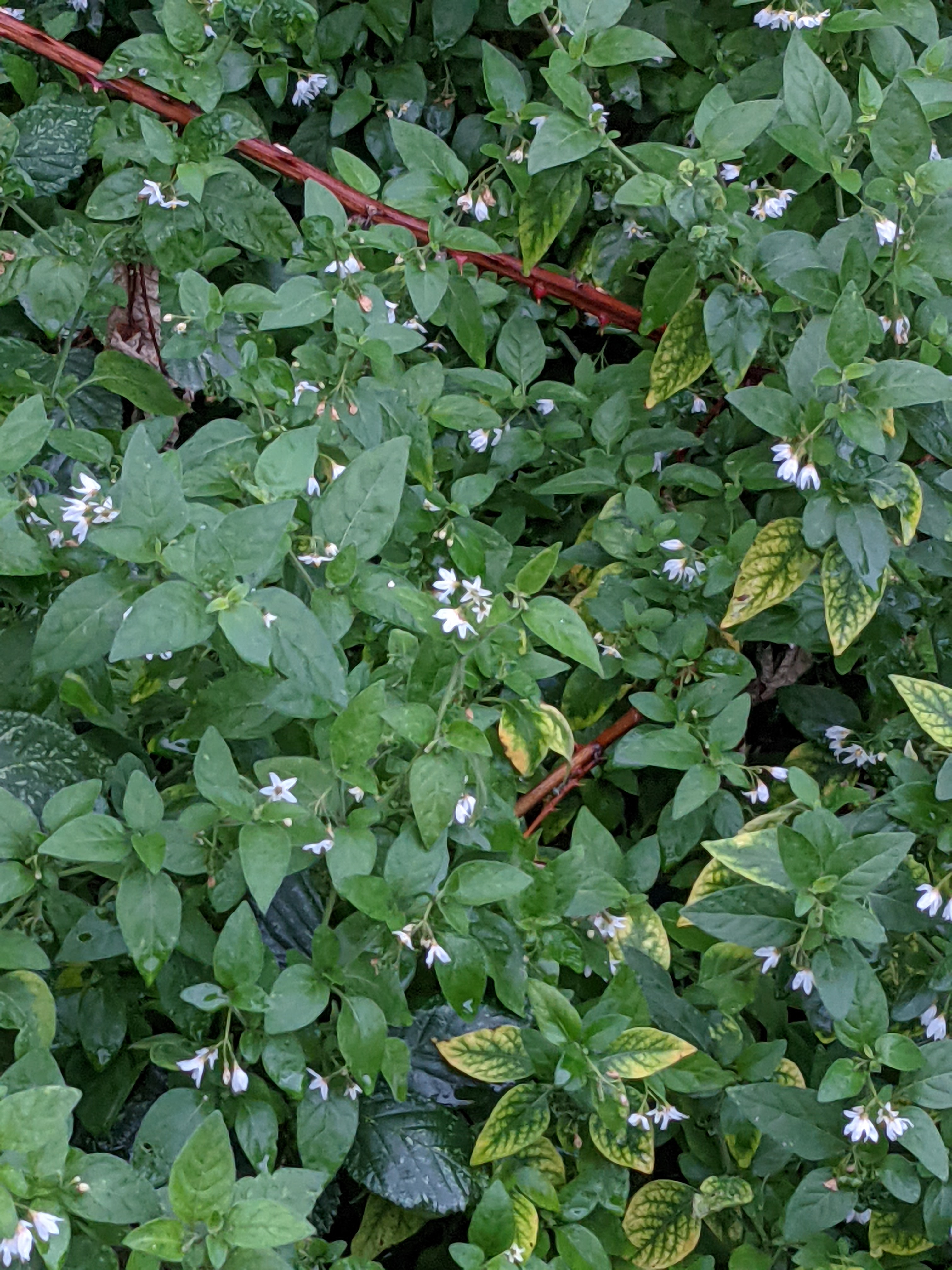 Walking back to Greenwich Station as the shade of night was deepening the final wildflower of the day Black Nightshade Solanum nigrum was found. It seemed a fitting end to a grand day out.  A total of 87 plants in flower on the first day of Winter. Two more than the year before. 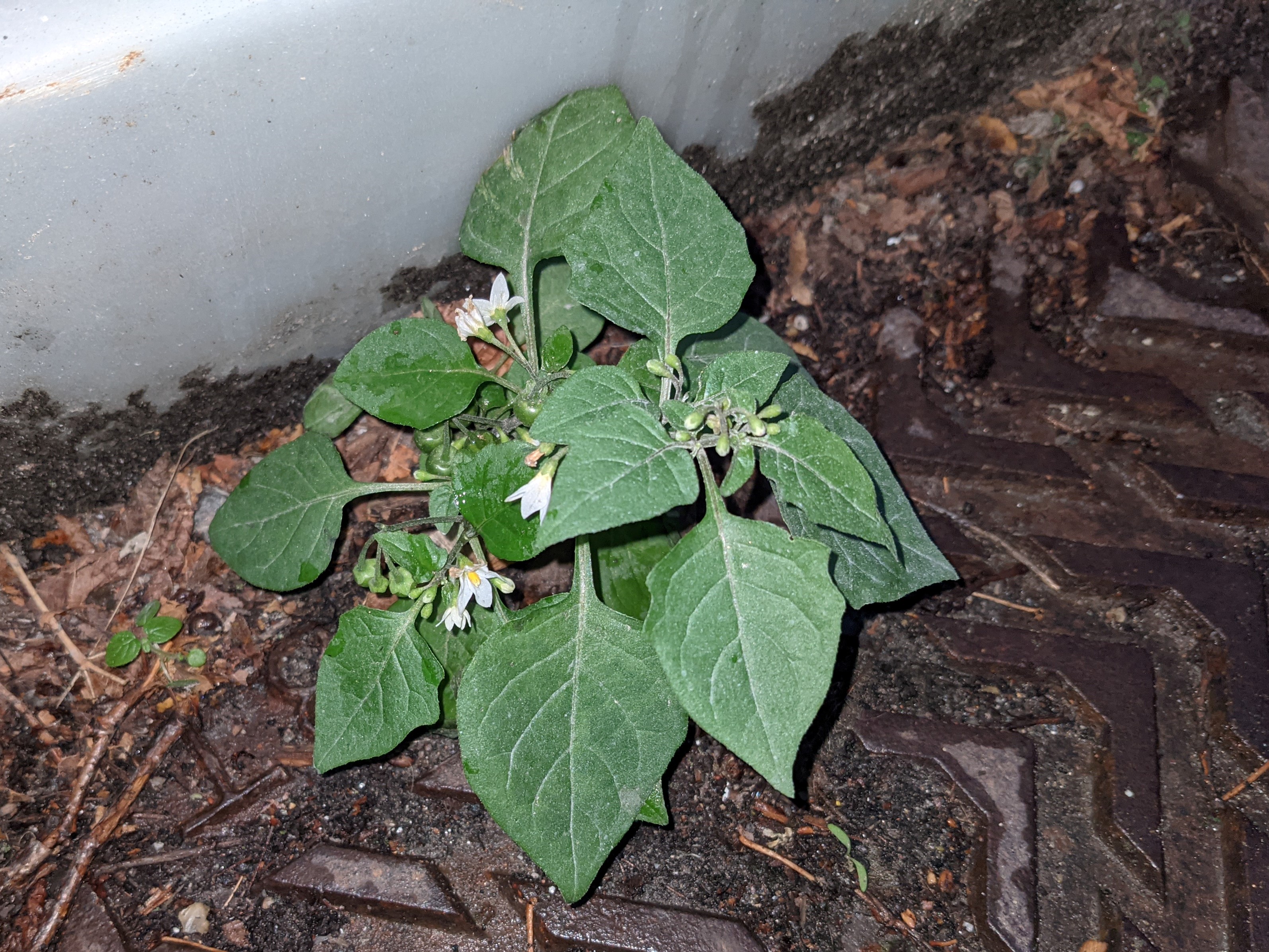 < Creekshow Give the gift of adventure this holiday season!  >